Create an Account - Increase your productivity, customize your experience, and engage in information you care about.

A historic county courthouse is more than a building for government functions. Standing with dignity and strength at the center of dozens of Georgia cities, these old structures serve as landmarks in, as symbols of, and as anchors for their communities.

Decisions for the Citizens

Decisions affecting all Georgians have been made in these buildings built for citizens rather than for bureaucrats and for communities rather than for jurisdictions. The courthouses' dignity and distinctive features engender a local pride and affection that modern econobox structures can never match. In those places where old courthouses have been lost to fire or demolition, people remember them with fondness for decades afterwards. 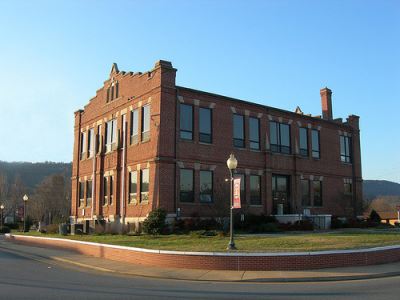 In most county seats, the courthouse remains a major traditional landmark, often the most recognized landmark in the county. Usually standing on the highest point in town, and frequently surrounded by the principal local businesses and institutions, they designate the heart of a community.

The courthouse is also a symbol of a county. Courthouse towers frequently appear in the logotypes of county governments and county historical societies because they instantly communicate the concept of county. Because they have architectural character, they add distinction to the county's image and enhance community pride. The old county courthouse is one building in the community that is not likely to be confused with others. The courthouse can be an important anchor in a downtown business district, generating foot traffic in much the same way as a department store in a retail mall.

No one really knows what served as Dade County's courthouse after the county's creation on Christmas Day of 1837. Usually, when the General Assembly created a new county, it provided for an inferior court or a special commission with power to select a site and contract for building a county courthouse. However, the legislation creating Dade County made no provision for a courthouse. In the early days of most counties, officials and judges met in private homes or utilized Masonic lodges or other buildings for county business. Although one source says that Dade County's first courthouse was built in Trenton in 1849, it is likely that the first courthouse was constructed earlier.

Though no one knows when it was actually built, that first courthouse burned in April 1853, and the legislature appropriated $1,200 to help the county build a new courthouse (Georgia Laws 1853-54, page 156). At some point thereafter, a new courthouse was built - but it was burned by Union troops in November 1863 in connection with the Chattanooga campaign.

Dade County's fourth and present courthouse was built in 1926. More recently, the Dade County Justice Building, a block west of the old courthouse, was completed in 1989. The largest county government facility is the Dade County Administrative Building adjacent to the justice building, constructed in 2000 to 2001. Today, the courthouse still stands in the center of our community with grants in place to help us revitalize this piece of our history and help keep it functional for generations to come. The Dade County Courthouse is on the National Register Of Historic Places (added 1980 - - #80001009).