Create an Account - Increase your productivity, customize your experience, and engage in information you care about.

Dade County is at the center of one of the world's most exciting regions for caving. Spectacular caves in this area contribute to the reputation of the area where Tennessee, Alabama, and Georgia meet (known to the caving community as the "TAG" region)

Popular caves in northwest Georgia include Ellison's Cave, Pettijohn's Cave and Byers Cave. With a depth or vertical extent of 1,063 feet and a length of 64,030 feet (almost 12 miles), Ellison's Cave in Walker County is the 12th deepest and 52nd longest cave in the United States.

The two deepest cave drops in the continental United States occur in Ellison's Cave: "Fantastic," which drops 586 feet, and "Incredible," which drops 440 feet. Pettijohn's Cave, also in Walker County, has more than six miles of passages, and the Byers Cave system in Dade County has passages totaling five and a half miles. 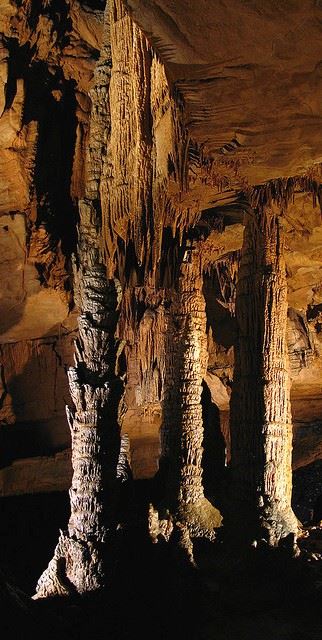 Most caves in Georgia are on private property, and their accessibility is commonly limited. As of October 2002, at least 23 Georgia caves in the TAG region were officially closed. Extensive vandalism has led to the erection of barriers at the entrances of some caves, such as Kingston Saltpeter Cave, which is the only cave in Georgia managed as a preserve by the National Speleological Society.

Several caves, including Ellison's Cave, are in the state-owned Crockford-Pigeon Mountain Wildlife Management Area west of LaFayette. In Cloudland Canyon State Park, Sitton's Cave is open to the public, but no tours are given, and the cave is very wet for much of the year.

Although several caves have been commercialized in the past, Georgia's only commercial cave in operation in 2003 was Cave Spring Cave in the town of Cave Spring, southwest of Rome and about five miles from the Alabama state line. Cave Spring Cave has a length of 300 feet and a vertical extent of 30 feet.

Caves and their wildlife enjoy some legal protection in Georgia, although implementation is largely at the discretion of landowners. The Cave Protection Act of 1977 makes breakage, burning, defacement, or destruction of a cave surface, artifact, or speleothem (cave formations, such as stalactites) without consent of the cave owner a misdemeanor in Georgia. The sale or export of a speleothem without consent of the cave owner is likewise a misdemeanor.

Storing or dumping hazardous chemicals, garbage, or animal remains in a cave is a misdemeanor, as is killing, disturbing, or removing wildlife from a cave. Because landowners determine the fate of caves under this law, caves can be stripped or even completely destroyed by quarrying at the discretion of the owner of the land or the owner of the mineral rights to that land.