The Battle of Chickamauga, one of the bloodiest engagements of the Civil War's western theater, and the biggest battle ever fought in Georgia, took place September 18 to 20, 1863.

The campaign that brought the Union and Confederate armies to Chickamauga began in late June 1863, when the Union Army of the Cumberland, under Maor General William S. Rosecrans, advanced southwestward from Murfreesboro, Tennessee, against the Confederate Army of Tennessee, commanded by General Braxton Bragg. Rosecrans' goal was to capture the city of Chattanooga, Tennessee, an important rail junction and gateway to the Deep South. Through a series of successful and relatively bloodless turning movements, Rosecrans' army forced Bragg's troops to abandon middle Tennessee and fall back to Chattanooga. 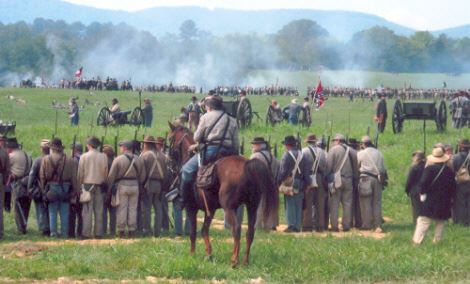 The Army of the Cumberland

Bragg subsequently deployed most of his troops at crossings of the Tennessee River northeast of Chattanooga, where he expected Rosecrans to attack. Instead, on August 29, 1863, the Union soldiers crossed the Tennessee River at several points west and southwest of Chattanooga. The Army of the Cumberland, numbering almost 60,000 men, then advanced southeastward in three widely separated columns over the rough mountain and valley terrain of northeast Alabama and northwest Georgia in an attempt to threaten Bragg's railroad supply line. When Bragg learned of the enemy threat to his rear, he abandoned Chattanooga on September 9 and retreated southward, even though Confederate reinforcements had arrived from Mississippi and East Tennessee.

Movements Against the Union

As his army passed through LaFayette, Georgia, Bragg learned of the widely scattered condition of the Union army and planned an offensive movement against portions of the Union force. During the second week of September, he had several chances to destroy isolated portions of the Union army, but command dissension resulted in several bungled attempts to punish the enemy. At the same time, Rosecrans began ordering a concentration of his troops, realizing that the three isolated corps of his army were in danger.

By September 17, two of Rosecrans' corps were reunited and were moving north toward Lee and Gordon's Mill on Chickamauga Creek to join the third Union corps. Bragg believed the Union troops at Lee and Gordon's Mill constituted the northernmost elements of Rosecrans' force. Thus he developed a battle plan to cross Chickamauga Creek north of the mill and drive the Union troops southwestward back against the mountains and away from Chattanooga.

September 18: The First Day of Fighting

The first day's fighting of the Battle of Chickamauga consisted of several Confederate attempts to seize crossing points on Chickamauga Creek. Union cavalrymen delayed the Confederates at Reed's Bridge, but eventually Southern forces seized the span and advanced southwestward toward Lee and Gordon's Mill. At Alexander's Bridge, Union mounted infantrymen also fought a successful delaying action before being forced back. Southerners did get across the Chickamauga Creek on September18, but the delays prevented them from reaching the left flank of the main Union force.

September 19: The Second Day of Fighting

The actions on September 18 led Rosecrans to believe that Bragg might try and interpose the Confederate army between the Union forces and Chattanooga, so Rosecrans ordered one of his corps commanders, Major General George H. Thomas, to extend his lines northward from Lee and Gordon's Mill to the area of the Kelly farm. On the morning of September 19, Thomas sent troops eastward from the Kelly farm to destroy what he thought was a small and isolated enemy force. Instead, the Union soldiers encountered Confederate cavalrymen and ushered in a confused general engagement that lasted all day and spread southward for nearly four miles.

Both Rosecrans and Bragg sent troops into the fighting, although the thick forests made it difficult for large bodies of troops to maneuver. At one point, a body of Confederates achieved a breakthrough and threatened to seize the LaFayette Road, but Northern reinforcements regained the lost ground. At the end of the day, the Union troops had withstood repeated attacks without losing their connection to Chattanooga. That night they pulled back to a defensive position along the LaFayette Road, which they strengthened by constructing log breastworks.

September 20: The Third Day of Fighting

Bragg's plans for the 20th called for an attack to begin at dawn on the Confederate right and continue southward, driving the Union troops away from Chattanooga. Ineptitude on the part of Polk and one of his subordinates caused the attacks to begin several hours late. Although a small force of Confederates briefly turned the enemy troops left, Union reinforcements drove back the Southerners. Union soldiers, protected by breastworks, bloodily repulsed the remainder of the attacks launched by Polk's troops.

Shortly after 11 a.m. on the 20th, Rosecrans came to believe that a Union division in the center of his line had created a gap by moving out of position. In order to rectify the situation, Rosecrans ordered another division under Brigadier General Thomas J. Wood northward to fill the supposed hole. But a massive Confederate attack led by Longstreet began at this time, with thousands of Southerners charging into the real gap left by Wood's movement.

By noon, disaster had engulfed the center and right wings of the Union army, sending Rosecrans, several of his principal subordinates, and many of their men into a retreat northward to Chattanooga. Some Northern soldiers eventually formed a line on a series of steep, wooded knolls known as Snodgrass Hill or Horseshoe Ridge. Although the Confederates continued to attack Snodgrass throughout the afternoon of the 20th, they were unable to capture the position. Late in the afternoon, Union General Thomas, who earned the name the "Rock of Chickamauga" for his outstanding performance that day, withdrew his forces from the battlefield back toward Chickamauga to the safety of a gap in Missionary Ridge.

The Capture of Chattanooga

Chickamauga was an extremely costly battle for both armies. Rosecrans had more than 16,000 men killed, wounded, or missing, while Bragg's army of roughly 68,000 men sustained more than 18,000 casualties. While the battle was considered a Confederate victory because it pushed the Union army back to Chattanooga rather than letting them proceed into Georgia (it would be the next year before the Union army tried again), Rosecrans achieved his objective for the campaign: the capture of Chattanooga. Union troops did have to be pulled from Virginia and Mississippi to reinforce Rosecrans' besieged army in Chattanooga, but otherwise the staggering losses sustained in both field armies produced few immediate tangible results.